Fitness
I Put In 5 Miles at the Office 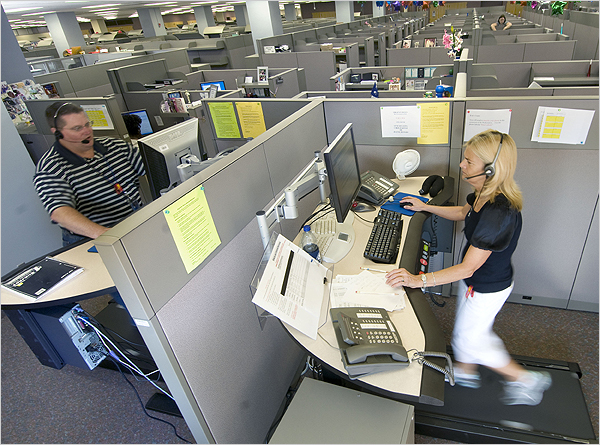 Chris Machian for The New York Times
Walking 9 to 5 Zandra Hooks, right, and Kirk Hurley can answer phones and do computer work (not to mention burn calories) on their Walkstations at Mutual of Omaha.

By MANDY KATZ
Published: September 16, 2008
TERRI KRIVOSHA, a partner at a Minneapolis law firm, logs three miles each workday on a treadmill without leaving her desk. She finds it easier to exercise while she types than to attend aerobics classes at the crack of dawn.

I'd fall off if I had to reach that far for the phone!

I office out of the house and I need the typical desk, but I'd spend a lot of time on some kind of a set up like that. Wish I had more room. My next big project!
fatmantrying is offline
Quote
#6 of 13 Old 09-18-2008, 09:28 PM
mudrunner
Special Member

I suggested this very idea in the Clubhouse awhile back and got a very indifferent reaction.

I think it would be great.

I could make one work. I don't talk to real people during the day.
“We are what we repeatedly do. Excellence, then, is not an act, but a habit.”

Greatness is a lot of small things done well, stacked on top of each other.

I think at 1.4mph you wouldn't be breathing quite so heavily. Or were you going to get a more robust model on which you could run?
This post is not meant to offend, demean or alienate anyone in any way, and if it did so please contact me by PM so I can rectify any offense as may be fitting. The opinions stated above are the sole property of the poster and in no way represent the opinion of this website or its members.

I actually tried one of these as a test subject.

Problem 1, men can't multitask. I can either concentrate on walking or working. I fell off

Problem 2, For anyone who's actually motivated enough to us it you're probably doing far more excersise anyway and this is just annoying! Therefore it's only practical for the people who don't use excerise who won't want to use it anyway!

Are you coming for our usual 15 miler tonight? Oh sorry I can't I did my 3 mile walk on the treadmill at work today!
Spiral, spin, ride the whirlwind. Knowing when the drumming stops, There'll be no second dance.
liath is offline
Quote
#12 of 13 Old 09-19-2008, 09:25 AM
jaektaylor
Senior Member

I have a stand-up desk in my home office - keeps me more alert and is better for my back.

I'm going to ad an excercise bike so I can pedal all or part of the day. I think this would be easier than the tread mill because I can coast if I need to, but I may consider the treadmill as well. One would probably get used to it and not go flying off the back of it after a few days.
jaektaylor is offline
Quote
#13 of 13 Old 09-19-2008, 09:33 AM - Thead Starter
merigayle
Moderator

How many calories would you burn using one of these under your desk? I am too up and go all day at work, so a TM is not feesable. bike maybe, but not sure if enough room in my office. I did once wear a pedometer to work and averaged 3-4 miles a day!

"100 milers are all gallowalking festivals."
-Tim
merigayle is offline
Quote